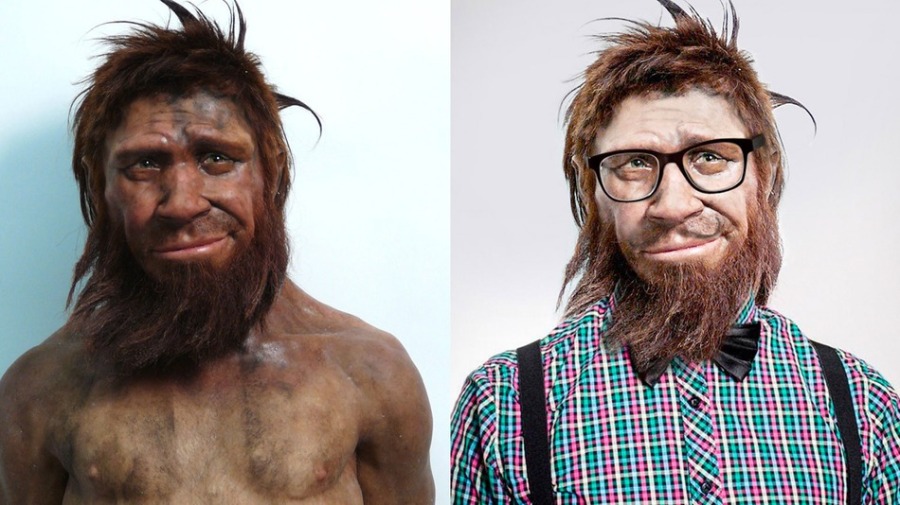 The wax figure is from an installation at the Espace de l’Homme de Spy in Belgium.

In Defence of Neandertals

Anatomically Modern humans (that’s all of the humans living today) think they’re pretty hot shit. They…I mean we… are pretty certain we are the pinnacle of evolution. No other creature has ever rivalled our complex cognition, linguistic abilities, symbolism, and ability for abstract thought. But what if, sometime in the history of humanity, another species had the ability to hip-and-shoulder us off that pinnacle? 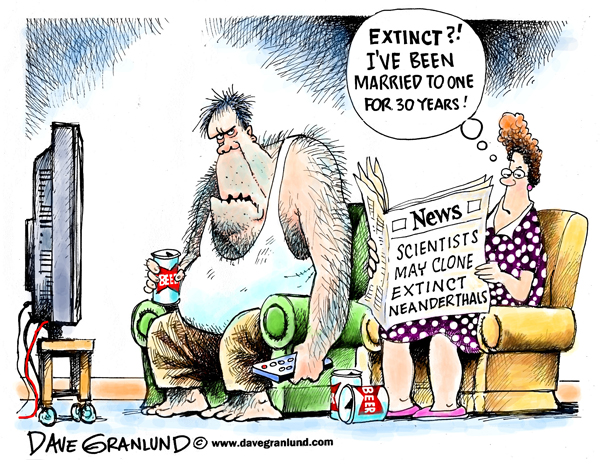 Often when I tell people I’m writing a novel about cloned Neandertals (pronounced nee-and- er- talls) they joke that they know some Neandertals at work or lurking the corridors of their local shopping centre. The word Neandertal is an insult for a modern human. Neandertals are the stereotypical cavemen: brutish, knuckle-dragging, ape-like creatures who communicated with grunts, hit women over the head with clubs and lived short, primitive lives.

However, this widely held view of Neandertals is based on outdated evidence and theories. Our knowledge of them is expanding, but only when/if a Neandertal is cloned will we know for sure the capabilities of the flesh covering the bare bones and DNA sequences we have unearthed.

Who were the Neandertals?

Neandertals (Homo neanderthalensis) were hominins (a name for all species of human) who lived in parts of Europe, Central Asia and Middle East between 30,000 and 300,000 years ago. Along with a newly discovered hominin, the Denisovans, they share a common ancestor, Homo heidelbergensis, with us (Homo sapiens). This split occurred around 500,000 years ago. So in a way they are our species sibling. Which may explain all the sibling rivalry.

They are named after the Neander Valley in Germany where some of the first fossils were found in the 1800s. They lived through a period of changing climatic conditions and were able to adapt to and survive in some of the harshest environments known to humans. Paleontologist Marcellin Boule reconstructed the first skeleton of a Neandertal — who happened to be arthritic — giving rise to their degenerate, stooped representation. 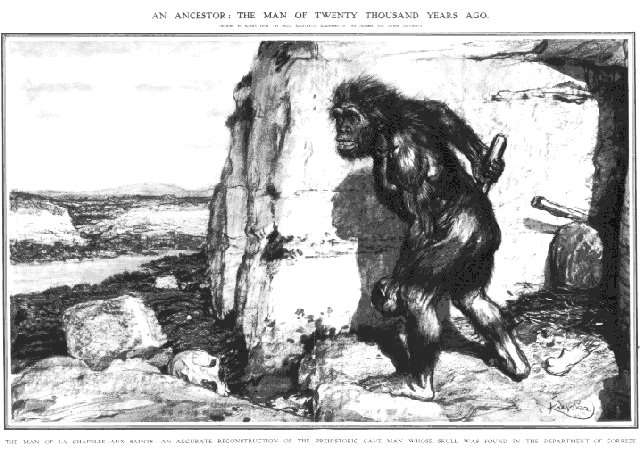 To date the remains of many hundreds of Neandertals, including babies, children and adults, have been recovered.

Svante Pääbo and his team at the Max Planck Institute for Evolutionary Anthropology in Leipzig, Germany sequenced the Neandertal genome in 2010. They found Neandertal and modern human genomes are 99.84% identical and present-day humans have inherited about 1% to 4% of their DNA from interbreeding events with Neandertals.

Unlike just about everything else about Neandertals the physical characteristics indicated by their skeletons are undisputed. They were thick-necked, barrel chested, had large wide shoulders curved inward, longer torsos and sturdier bones than modern humans. Their limbs were shorter than ours and they had large, stubby fingertips. They had bowed thighs, large knee caps and thick forearms roped with muscle. Their faces had no chin, they had lower foreheads with dual brow ridges, larger eyes, larger nose holes, large square teeth and a muzzle like, projecting mid-face. Their watermelon shaped skulls were broader, flatter and thicker and featured a prominent occipital bun. Their brains were about 10% larger than ours with smaller frontal cortices. Males stood 164–168 cm and females about 152–156 cm tall (shorter than us on average). Their muscular bodies would have required more calories than our own to support basic metabolism.

What happened to them?

Neandertals disappeared from the fossil record around 40,000 years ago, leaving Homo Sapiens as the last remaining human species in the game of Earth domination. Nobody really knows what happened to them and debate abounds. One oft repeated story goes that Neandertals were inferior in a variety of ways and just couldn’t compete with the awesomeness of us.

One disadvantage of Neandertal lifestyle which has been put forward as a reason for their demise is their almost exclusively meaty diet and therefore dietary inflexibility. However evidence is amassing that they may have had a more varied diet that, while heavy on meat, also included vegetables, berries and nuts. Evidence from Gorham’s cave in Gibraltar indicates they also may have caught, butchered and cooked wild pigeons long before modern humans became regular consumers of bird meat.

Evidence for interbreeding corroborates an “assimilation” theory which proposes Neandertals became swamped by modern human genetic material and were bred out. DNA analysis reveals Neandertals were less genetically diverse than modern humans. They must have gone through some sort of population bottleneck (possibly due to harsh climatic conditions) which resulted in smaller and more isolated populations and probably inbreeding. As modern men have no traces of Neandertal DNA on their Y chromosome it’s likely genetic incompatibilities between the two species led to miscarriages or reduced fertility of male hybrid offspring further weakening the survival of the species.

“…the Neandertal archaeological record is not different enough to explain the demise in terms of inferiority in archaeologically visible domains. Instead, current genetic data suggests that complex processes of interbreeding and assimilation may have been responsible for the disappearance of the specific Neandertal morphology from the fossil record.” —Paolo Villa, Wil Roebroeks, Neandertal Demise: An Archaeological Analysis of the Modern Human Superiority Complex, PLOS One, April 2014, Volume 9, Issue 4.

There are several sources of evidence to support the proposition that Neandertals were advanced humans capable of intelligent thought processes similar to our own. Being a staunch Neandertal advocate I will list these sources of evidence below, but as a scientist I have to qualify this with the statement that some of this evidence is disputed within the paleo-archaeology field or interpreted in alternate ways. For example there are assertions that artefacts can be explained by trading with or copying anatomically modern humans, or the contamination of Neandertal archaeological layers with more recent, modern human artefacts.

The use, design and manufacture of complex tools from a range of materials indicates a high level of cognition and enhanced working memory.

Neandertal society was close-knit, caring and complex. Skeletons of older individuals showed signs of injury, indicating the sick and injured were supported by their family members. Remains were found buried in places where the Neandertals lived. More than a third of Neandertal graves found contain children under the age of four, typically showing great care in their burials. Some were buried with objects including flint scrapers and ceremonial animal bones laid out around the body.  A group burial plot in Spain held the remains of six adults and three children. DNA analysis showed they were related.

High-resolution 3D analyses of a fossilized hyoid bone support the hypothesis that the Neandertals communicated with the use of complex language. The internal microstructure of the hyoid bone is similar to that of the hyoid of modern humans. Also the discovery of a version of the FOXP2 gene compatible with language supports the use of complex language.

Forensic analysis of the Neandertal hunting grounds has shown them to be efficient tacticians and selective butchers. These were thought to be traits of Homo sapiens only. It appears that Neandertals manipulated their prey, (reindeer, horses, rhinos and bison), into areas they could easily ambush them. 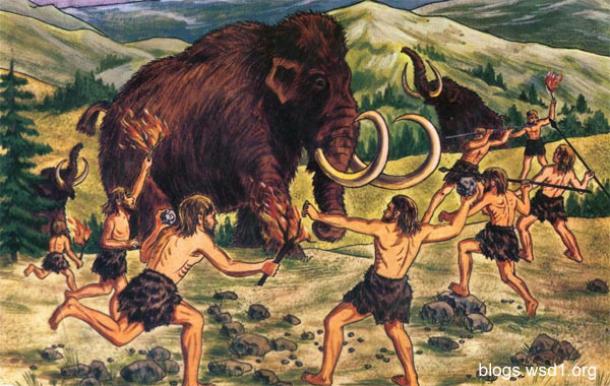 Survival in Ice Age Europe would have been impossible without mechanisms for reducing exposure. Caves were often used as shelters, but open air shelters were also erected.

They built hearths from at least 300,000 years ago (well before contact with modern humans) and were able to control fire for warmth, cooking and protection. They also wore animal hides. However, there is no physical evidence of sewing, and clothing may have instead been wrapped around the body and tied.

Neandertals built one of the world’s oldest constructions — 176,000-year-old semicircular walls of stalagmites in the bowels of a cave in southwest France.

Art has been traditionally considered the sole domain of modern humans and is regarded as a major cognitive step in our evolution. Evidence of Neandertal art (although somewhat flimsier and subject to more dispute than other areas of evidence) suggests complex symbolic thought and abstract expression. 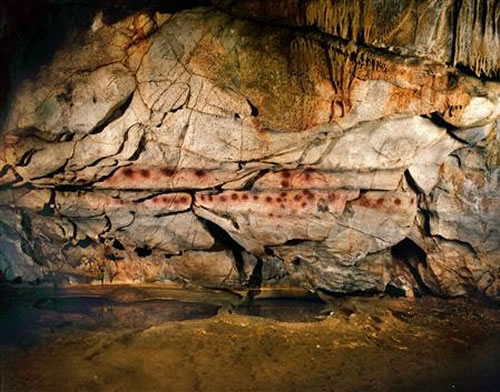 So why would a modern human like myself be such an advocate for a species that challenges our claim to ultimate superiority? It all started in 2013 when Harvard scientist George Church claimed it could be technically possible to clone a Neandertal. I wondered what a cloned Neandertal would be like and how they would be treated. To answer the first question I researched and read everything I could and soon realized it was likely they weren’t as primitive and different from us as is commonly believed. To answer the second question I began writing stories about cloned Neandertals in a futuristic environment (when this kind of technology could likely be possible). It became apparent readers were expecting something more simple-minded and animalistic from my characters and I became somewhat defensive about Neandertal intelligence and capability.

If we ever did clone a Neandertal and raised it in a contemporary or futuristic society they wouldn’t wear skins, sleep in caves, hunt with spears and grunt like gorillas. They would be very much like us.

“I’m convinced that if one were to raise a Neandertal in a modern family he would function just like everybody else. I have no reason to doubt he could speak and do all the things that modern humans do.”— Trenton Holliday, a paleoanthropologist at Tulane University. 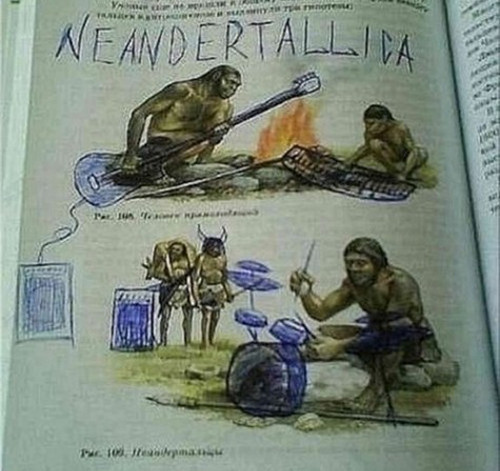 *There is no evidence of Neandertals playing modern instruments

How to Think Like a Neandertal by Thomas Wynn and Frederick L. Coolidge. Oxford University Press, (2012).

The Neanderthals Rediscovered: How Modern Science Is Rewriting Their Story by Dimitra Papagianni, Michael A. Morse. Thames and Hudson, (2013).

2 thoughts on “In Defence of Neandertals”